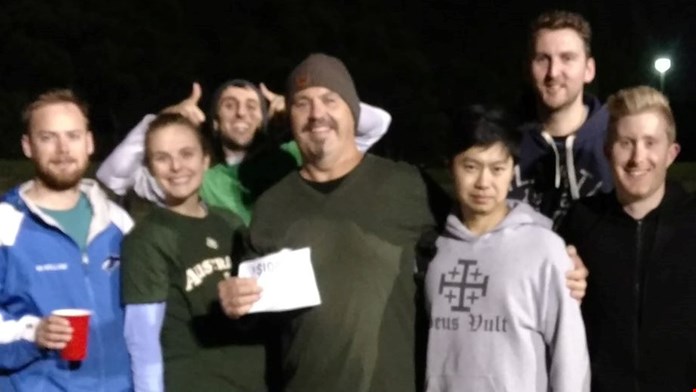 What does Wednnesday night normally look like for you? Do you love hump day, or hate it? Well…some 100+ individuals across Sydney may argue that Wednesday night is actually the HIGHLIGHT of their week!  For this lucky bunch of people, 6pm on Wednesday nights means grabbing active-wear and excitedly making their way to Alexandria, where sport, friends (new and old), teammates, music, pub drinks and a sweet community await.

While we only launched Wednesday night leagues at this venue a few months back, indoor soccer is already SELLING OUT, and floor hockey is quickly becoming an iconic “member experience” league, where team rosters are changed each week so members play with and against each other throughout the season, culminating in a “King of the rink” being awarded to the individual player who accumulates the most points (+1 for showing up; and +1 for being on the winning team on the night).  How fun!  Potentially even more fun than playing sport though, is that the end of the night ends with a walk across the parking lot to the local clubhouse – The Rocks Brewing Co. – for some post-game socializing.  Epic.

It was one such Wednesday night that I had the pleasure of catching up with one of Urban Rec’s long-term members – Greg.  So, I invite YOU to grab a drink, indulge and let Greg tell you a little bit about himself and why Urban Rec helps light up his week.

Greg is a legend.  Full stop.  He started playing sport with Urban Rec about 4 years ago, and throughout his playing days, he has participated in flag gridiron, basketball and soccer teams and has subbed for dodgeball, hockey and touch football.  (PIctured above with his Flag Gridiron team). And, in his words, “I am still looking to join in for more sports…the goal for next season is 3 nights per week playing sport.”

HOW LONG HAVE YOU BEEN PLAYING WITH URBAN REC?  WHY DID YOU JOIN?  AND WHICH SPORTS HAVE YOU PLAYED?

At least 4-5 years.  I’ve played flag gridiron, basketball, soccer and subbed for dodgeball, hockey and touch footy.  And…I am still looking to join in for more sports – goal next season = 3 sports.  I joined because other sports I had played all had training during the week and games on weekend, and I prefer the more social side of this.  I was nervous to join because of my age, but everyone is so welcoming….I have now captained 2x teams and everyone is so friendly!  And I’ve also now tried sports I’ve never played before.  I also love that it is all abilities, so you don’t have to be a marathon runner or semi-pro…just purely fun.

WHAT IS THE BEST PART (OR YOUR FAV MEMORY) OF URBANREC?

Best thing is subbing in.  It allows you to try a new sport before you commit to a full season.  I like the social things, like the end-of-season tourneys and the blacklight dodgeball tourney…pub nights with the UrbanRec cards.

IF YOU COULD INVENT A NEW SPORT FOR URBAN REC, WHAT WOULD IT BE?

Ultimate Frisbee.  But that is a really long game -> so maybe a short version of ultimate.

WHAT’S YOUR FAV TEAM NAME YOU’VE HEARD IN SPORTS – whatever the setting?

I work at a behavior school, so kids who have come out of lock-up or somewhere in-and-out in between.  Some haven’t gone to lock-up and are just not making great decisions.  But a lot are doing really good things too!

WHAT STEREOTYPE DID YOU PLAY IN HIGH SCHOOL?

I like to think I was the class clown.  But I went through a punk phase in high school…not that my kids have ever seen any of those photos.  But I always loved sports – the traditional sports in Australia.

WHAT’S YOUR DRINK OF CHOICE?

Scotch.  I mean, I drink beer more, but a really nice scotch…if I can afford one…I really enjoy it.  But maybe I shouldn’t say that…makes me sound old.  All these young kids saying beer, and I’m saying scotch.  A beer’s good too.  (smiling)

ELMO WALKS THROUGH THE DOOR RIGHT NOW WEARING A SOMBRERO.  WHAT DOES HE SAY AND WHY IS HE HERE?

Haha…(laughing)…jeeze…you throw in some really good ones Lindsay.  Why am I wearing a sombrero?!