UR HQ: Summer Wrap Up

Things are in full swing behind the scenes at Urban Rec HQ, so here are some updates from us to you.

We are hosting PUB NIGHTS as a new initiative this season. It means we hand pick one night per league and organise for FREE jugs to meet teams at the bar! The purpose… to get you guys socialising outside of the field, court, diamond, pitch. It’s all about the ‘third half’, right?

We launched our SECOND ever league in Canberra this month. Flag Gridiron started very strong with eight brand new teams. Our main man in Canberra Donald said he was really impressed with the teams down there, we were worried they were going to take a while to buy into the “Urban Rec Way” but they all played with a seriously good attitude, and we are pumped about the future leagues we’re launching this year in Canberra.

...went off with a bang. Shit got awkward at some of the leagues, but love isn’t easy. We certainly know which of our Event Hosts are on the market now, and which of our players are taken. Haha. It was a lot of fun, with my favourite part being Dan dressed up as cupid.

...and while it might not mean much to you guys, it’s seriously nolstagic and wonderful for me to watch. Seeing Urban Rec grow from ONE touch football league, and a dream in Dec 2011, to 31 leagues and locations across Sydney and Canberra. It’s seriously the most rewarding thing I have ever done. Thanks for believing in us everyone. :)

an epic dodgeball event for 4pines

4Pines celebrated Christmas in Feb this year, with a huge 200 person conference, plenty of beer, and a Dodgeball Tournament, we will never forget. The themes included ‘Gross’, ‘Where’s Wally’, ‘Bogan Pride’, ‘Summer Mullets’, ‘Denim Devils’… the list goes on, and they did not dissapoint. You would think people who work together would be less competitive, noooooo sir-ee. It was on for young and old, the cages we’re rattling, and no one was humble in their achievements. It was the definition of fun, and we should all try and get at job at 4Pines.

We hosted a SUPERBOWL SUNDAY TOURNAMENT, the Sun eve before the real deal in the US and it was awesome to see four new teams come out and try their hand at a new sport. We also bought a new Urban Rec Tournament trophy which is HUGE, 2 teams now have their names planted permanently on the big beauty as a part of UR history. Click here to see more about the event.

Well, thats a wrap for Summer. We are going to do these updates more often. We are humans here behind the scenes, so we want you to know more about us, and what we get up to each season.

Chaos in the Cage - 5 weeks in the life of a Cage Host.

Holly’s High Flying Los Flamas Blancas Still unbeaten 5 games in! Can anyone derail this train?!…The bookies are tipping Leanne and the rest of the Jillaroos from “It’s all in the Neymar” to take the top spot over the coming  weeks! Watch this top spot battle!

From the Top of the League to the Bottom… The Belters sit equal last with the Mad Cows, My sources tell me things are about to change at the tail. The Belters all time highest scorer, The Tatted Silver Fox himself Ryan Christie returning from a minor ankle injury could be exactly what the team need heading into the business end of the season. The Mighty Pig from the Mad Cows has been spotted putting his team through grueling training sessions on sunday arvos in a bid to rise up the league, after playing some real nice footy against the Neymars it would seem to be paying off!

And into the mixer! MID table battles GALORE! The Unicorns led by the Judge himself (occassionally the jury and executioner) had a storming start winning 3 from 3 but seem to have hit a couple bumps in the road, i can only imagine they are soon to return to winning way with hot shot Tommy Gun in fine form recently.

Sitting just behind the unicorns in equal 4th place are No Baine & Leichhardt Utd! No Baine’s Baby Faced Assasins may not be able to get into a pub but they are certainly a force to be reckoned with as far as scoring goals is concerned! Leichhartd Utd Strong at the back, fast up front! Do not underestimate Marcus – The Greyhound with a rocket right hoof!

Onto the fan favourites Inner West Ham and Such Good Friends!! Inner West Ham...well what can i say, what they lack in eyebrow shape they make up for in heart! Having lost star man Jimmy Jangles to Japan the future looked bleak but not for Old mate Andy, the proud father to be, seems to have had a resurgence in recent performances not only saving but bagging goals at each end! SUUUUUCH GOOOOD FRIENDSSS, I dont want to make irresponsible correlations but is it purely coincidental that the SGF have began to decline at the exact moment Tom ‘the hulk’ Hogan Returns?

If you want to play Soccer with Urban Rec, you can join any of our Soccer, or Street Soccer leagues that run year round. 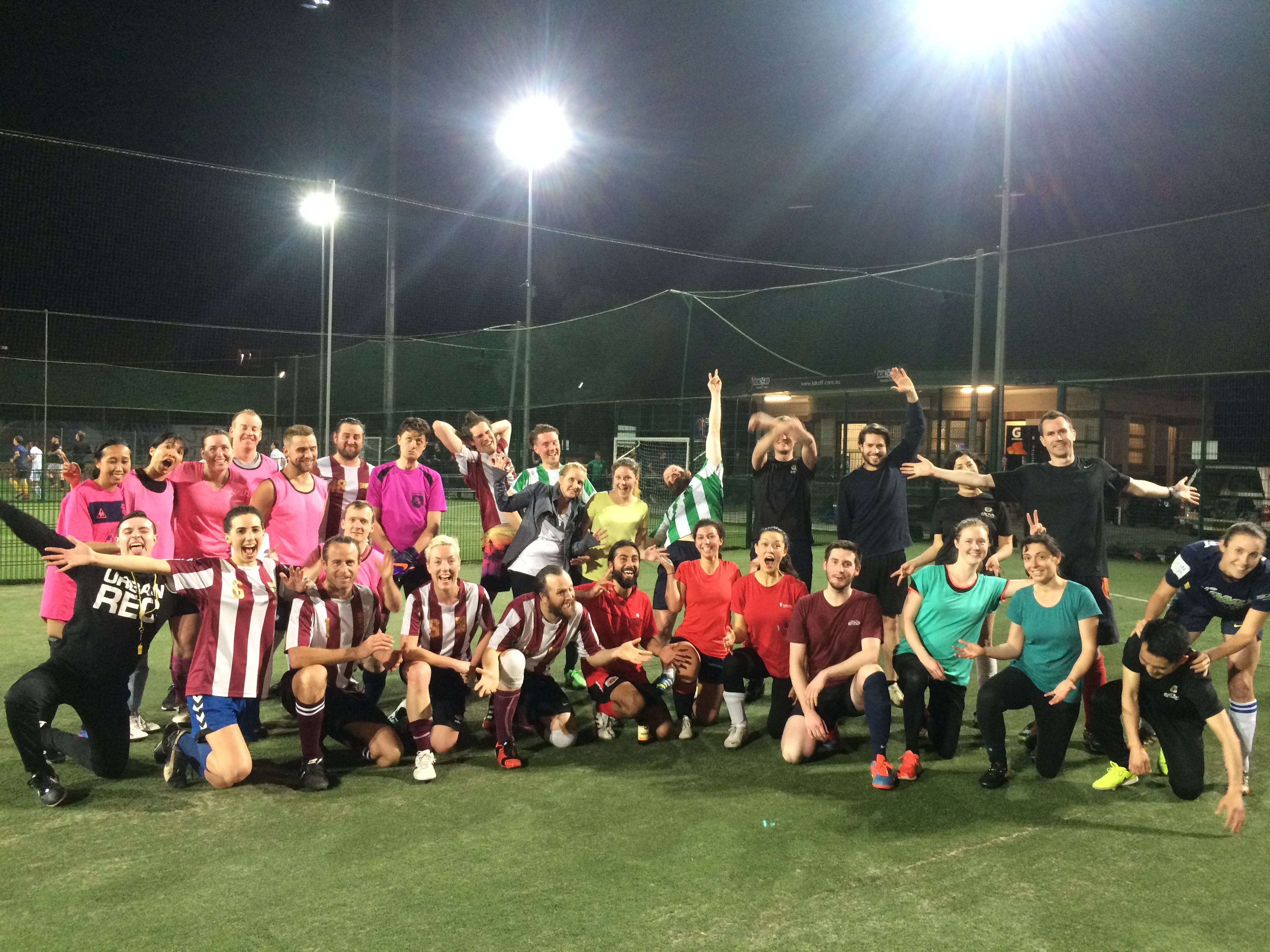