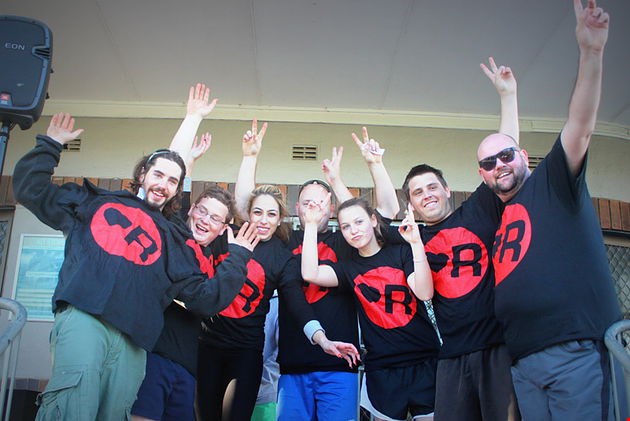 Urban Rec was very excited to host their annual Future Dodgeball Festival last Sunday on July 13th, 2014. The event was a roaring success with the anticipated 20 teams registered, and plenty more spectators, friends and family to boot.  20 teams from all over Sydney met on 4 courts over 3 hours, playing a total of 4 games each in the round robin.

The event was not going unnoticed across the Country with Today Weekend Show crossing live to the event, on national television and the hosts witnessing a small taste of what would lay ahead for the day.

Nearby on courtside, with Budweiser as a major sponsor of  the event and “The Bud Bar” was in full motion, and proved an excellent resting place where patrons could donate money for buckets’o’bud, with 100% of their donation going to charity. All the while they enjoyed the funky 90’s beats coming from the (unreliebale) sound system.

While they waited dressed up as Bogans, ducks, and 90’s RnB bands, teams took advantage of the Bubble Soccer kindly donated by Kikoff Centre Fraser Park. For a small donation, teams were tumbling, and laughing, and really playing very little soccer, but having a fantastic time all the same.

By the time lunch came around, players had worked up a hunger, and thanks to Got Fries and The Sizzle, they were not disappointed. Well-fed players watched on as the finals teams for both the Scrubbers Cup, and Championship were announced. In a single elimination, and highly competitive round, only two teams would walk away with glory.

Drop Bears took out the Scrubbers Cup and Mixed Nuts took the Champions league, with Urban Rec Champion t-shirts, and a glistening silver cup to treasure till next year. The winners ceremony saw all teams showered with beer including the best dressed winners, Fire Breathing Rubber Duckies.

A huge thanks is owed to our event sponsors, Budweiser, Kikoff Fraser Park, and Urban Rec. A humungous thanks and praise to all of the volunteers, who gave up their whole Sunday in the name of charity and fun. Without them, the event would not have been a possibility. We managed to raise$3500 on the day for Project Futures.

Event photos can be found online here, and event video to be released in the coming weeks.

PROJECT FUTURES is a not for profit organisation, run by a passionate network of young and inspiring professionals. We raise awareness and funding for programs dedicated to combating human trafficking and sexual exploitation globally.

If you would like to join us for any of our Urban Rec Dodgeball Leagues, you can do so by clicking here to see when our next league is starting. Otherwise we look forward to seeing you all next year!