Whats On: July in Sydney 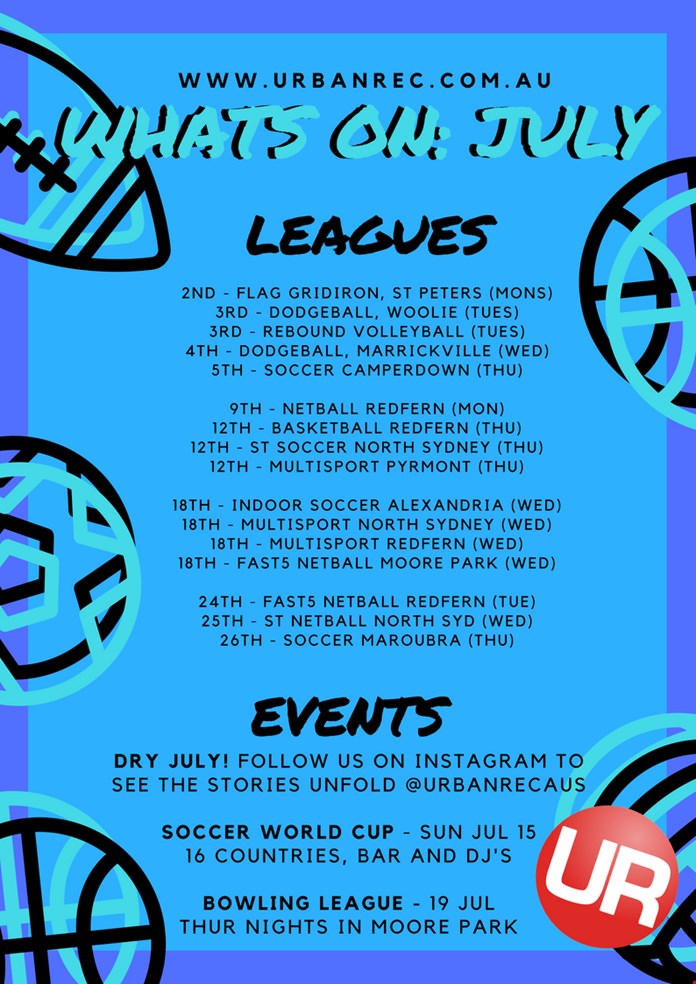 Whats On: July in Sydney

It’s due to be a HUGE month at Urban Rec Sydney, so we decided to make it simple. This is your chance to play sport with us this Winter. Some of our leagues have already launched, but the bulk is happening this July.

Choose from our Street Soccer leagues in North Sydney and Camperdown on Thursday nights. Or join the outdoor Soccer league in Maroubra. Our Centennial Park league is now on hold till September.

We consolidated our Flag Gridiron leagues for the Winter and are now running just one league on Monday nights in St Peters. But do not worry. Our Eastern Suburbs league will be back in the Spring on Tuesday nights!

Launching in the first week of July, our Dodgeball leagues are both raring to go. The Wed nights in Marrickville are a sold out event, and the Tuesday league in Woolloomooloo is going strong and with a new clubhouse this season, we are excited to show the teams a fun time this Winter!

Our Netball leagues are super popular, and even though most of them are outdoors, netballers bloody love it. You can choose from 3 types of Netball. Your regular 7-aside Netball on Monday nights in Redfern. Then Fast5 Netball on Tuesdays in Redfern and Wednesdays in Moore Park. We also have another version of Netball played in North Sydney on Wednesdays, this is called Street Netball, and it’s so different, but so fun.

Our ever-popular Multisport leagues are all looking to start up again. We have our Wednesday night competition in Redfern, and one in North Sydney which normally attracts the after work crowd. Then our OG league, which is in Pyrmont on Thursday nights. Each of our locations offer varying types of sport including Basketball, Netball, Hockey, Tag Footy, Dodgeball, Soccer, and even Benchball. You never know what you’re going to get, and it makes for lots of fun.

Our Rebound Volleyball league is consistently the most fun sport we offer. Played on a squash court this variation of regular indoor volleyball is good for beginners, and people wanting to try something new or test their skills. We always get 6-8 teams every season, and the tunes, and post game drinks makes this league different and unique. Where will we launch the next one?

Our Basketball leagues are famously different and more fun. We offer the skill level thats for beginners and people not wanting to take it too seriously. So it’s all the good parts of streetball and pickup, built into a league with consistent games, and teams. You can play in this league on Thursday nights in Redfern. Starting very soon.