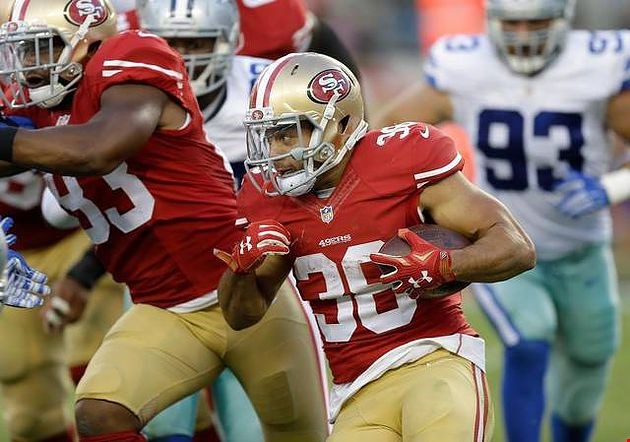 Sure you, might not be good enough to play for the Parramattaa Eels (though this year you might have been close). But that doesn't mean that you aren't enough of a beast on the flag footy field to to follow in the footsteps of Jarryd and give gridiron a crack.

If you've only played Madden or used the Superbowl as an excuse to get silly on a Monday morning with your American friend, the x's and o's might be a bit confusing. But here at Urban Rec we like to keep things simple. So we'll lay out the differences that you need to know if you are thinking about switching codes.

The Positions are Confusing and Scary

Quarterback (QB): Needs to know how to fang it long. Likes the spotlight a little more than most, but needs the trust of his teams. Secretly hates cardio.

Running Back (RB): Fast and elusive, and ready for a handoff from the QB when the D is on the backfoot. (Not so) secretly loves cardio.

Wide Receiver (WR): Footsoldiers of the offense, need to have the speed to beat the coverage or the fight to grab the ball in traffic. Loves diving and isn't afraid to eat some dirt.

Blitzers: Their job is to hone QB like a heatseeking missile and shut down the play before it begins. Terrifying on the field, and good at parties off.

Defensive Backs (DB): Unsung heroes of the field, the legion of boom needs to be ready for an arial attack. The interception is the slam dunk of gridiron, and you are LeBron, baby. Plus, you get tomake up a new celebration after every play, so there's that too.

Why this is good: Everybody has their strengths and weaknesses, and part of the game is planning for them. And if you're all the best at everything (duh), you canalways switch it up if you get bored.

Instead of the six tackles you get in regular touch footy, each time a team receives posession, they have four attempts (downs) to move the football past halfway, and then receives a new set of four to make it to the endzone for a score.

Why this is good: Running the ball up the middle can get boring. It's filler, basically. With flag gridiron, we trim the flab and get down to the flash. When you've only got four plays to get things done, you need to get creative and think big. When you're backed up deep with one down left, draw some routes in the sand, yell “omaha”, say a random string of letters, snap the ball, and go for glory.

Besides, it's been scientifically proven that your brain can only count to 4 without adding. You don't think you are smarter than your brain, do you?

After each play, teams get 20 seconds to huddle up and plan for the next one.

Why this is good:

2. This is the time for you inner tactical mastermind to be unleashed, so you

3. Wednesday night is happy hour at the local, so you probably need a sec to catch your breath (this is the real reason)

Each play, the quarterback of the team with the ball can make one forward pass to any of his players.

Why this is good: Whenever I go to rugby games people seem to constantly hurl abuse at referees for missing forwards pa:sses, and this cuts the poor guy a little slack. Plus, it gives you a shot atdoing one of these ones.

I could totally pull that off if I had the chance, 100%. I played 2nds cricket in high school you know, it's basically the same thing.

Catch the ball, or run it into the endzone, and your team scores 6 points and a shot at more. Then confetti rains down, we dump gatorade on the winners, and we all go to disneyland/the pub.

Why this is good: (cmon, you know you want to do that)

Gridiron is here. It's new but it's not shiny. It's intense, it's fun and it's spectacular. And at Urban Rec this spring it's any given Thursday. Grab your mates, and register as a team now.