THE OBJECT OF THE GAME Softball is played between 2 teams, each consisting of 9 players. Whichever team scores the most runs wins the game. In order to score one run, the players must round all the bases and cross home plate. Your team can only score runs when it is your team’s turn to bat. Each team stays up to bat until the fielding team takes out 3 batters.  Each team has a chance to bat and to field.

1 DURATION OF THE GAME

3 STARTING PLAY Team Captains should meet at the beginning of the game for a coin toss. The winner of the toss shall choose if they want to bat, or field first.

4 SCORING In softball whoever scores the most runs win, but how do you score a run? In order to gain one point or a run, a base runner must round all the bases by stepping on each base and finally crossing home plate.

6 POSITIONS When your team is not batting they are fielding. This means that your team is out in the field trying to get the runners out. The following, are the positions for when your team is fielding, exception for the pitcher who pitches to their own team 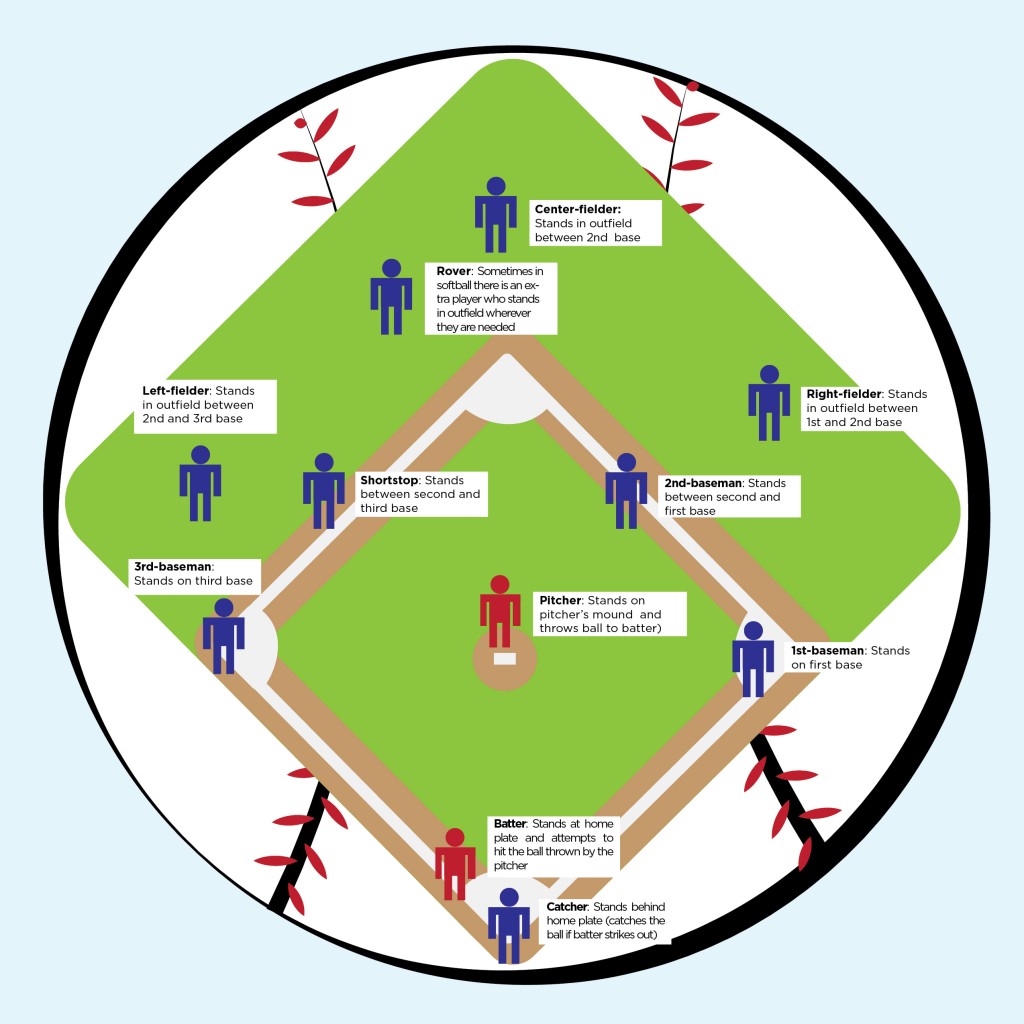 9 BASE ETIQUETTE The fielding team cannot block a base or home plate, but it is the responsibility of the runner to avoid contact with a fielder.

11 THE PITCHER: is part of the offensive team (you pitch to your own team). The pitcher CANNOT touch the ball or interfere with play in any way.  If they are hit by a ball, touch the ball or interfere with play, the batter will be declared out and the runners must return to their base.  They must pitch from the line in the middle of the infield between first and third base and halfway between home and second base.  The pitching stripe/mount will be placed at a distance 50 feet from the tip of home plate.

12 FIELDING When it is your team’s turn to field, the most important thing to do is not be afraid of the ball and try to catch it. This is your chance to get the runner out. Remember you need 3 outs before your team can bat  again.

13 GETTING A RUNNER OUT

14 THE INFIELDERS are not restricted to their location on the field.  Outfielders must stay behind the 160-foot restraining line until the ball is struck

15 WINNING THE GAME: The team with the most runs at the end of the final innings will win the game.  Tie games are allowed.  Extra innings may be added, but not if conditions warrants stoppage of play (safety, sundown). A draw will be awarded if both teams have an equal amount of goals. The winning team receives 3 points, 1 point each for drawn game and no points for a loss. Your Fun Points will affect your position on the standings. If two teams are matched on competition points, the team with the higher fun points rating will be favoured up the ladder.

16 FAIRPLAY SYSTEM: Each league night you will have an Event Host onsite, but these guys are not official referees. Urban Rec is a recreational league which practices a fair-play and fun-first policy, meaning you should be making your own calls on the game. The Event Host will be there to make the calls not made by individuals, keep time, and help guide the games within the game play rules. The Urban Rec Event Host has the final say on any issue that cannot be self-resolved.

17 SPORTSMANSHIP All Urban Rec participants have read and agreed to the Urban Rec Code of Conduct. We also exercise a strict Disciplinary Policy. If you are seen to be rude in any way or not playing within the respect of the rules and Code of Conduct, you will be asked by the Urban Rec Staff to sub out of the game. If after returning to the game your attitude does not improve you will be asked to leave the venue, and an assessment will be made if you can play again. We do not tolerate idiots. Play fair.