DURATION OF THE GAME 2 halves of 18 minutes each, with a half-time interval of 5 minutes. There is no stoppage of play for substitutions during the game.

THE FIELD The field is the whole area of the pitch including the area behind the goals. Rebounds from all surfaces are aloud including the walls and the fence. the height and width for the goals shall be 3 feet by 4 feet. The ball used is a size 4, futsal ball. 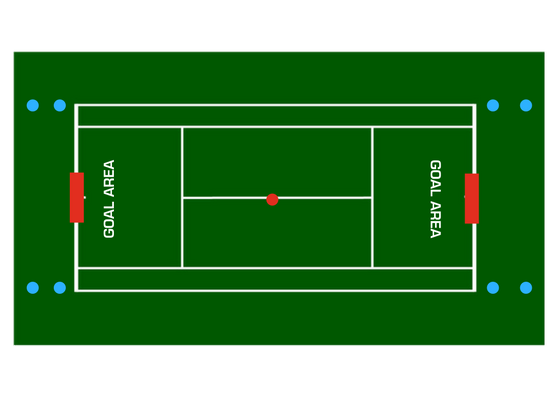 THE TEAM The number of players shall be 5 players including the goalkeeper on the field.

THE START OF PLAY A game is started by a kick-off in a forward direction from the centre mark. The team winning the toss of a coin shall have the option of choosing ends or taking the kick-off. All players must be in their own half before the kick-off can be taken. The opposition must be 4 meters from the ball when the kick-off begins.  As all free kicks in our league are indirect (see below), the kick-off is also an INDIRECT KICK, meaning you cannot score directly off a kick-off without the ball first touching another player.  Following half-time, the game is restarted at the centre mark with teams changing ends and the kick-off being taken by the side that did not start the game

STARTING AFTER HALF TIME Following half-time, the game is restarted at the centre mark with teams changing ends and the kick-off being taken by the side that did not start the game.

METHOD OF SCORING A goal is scored when the ball has wholly crossed the goal line between the goal posts and the cross bar. After a goal is scored, the game is restarted with a rollout from the goal-keeper of the team that was just scored upon.

OFF SIDE RULE The off-side rule is NOT to be used. However deliberately placing a player or players in an off-side position is contrary to the spirit of the game and is discouraged.

BALL IN AND OUT OF PLAY The ball is out of play when the ball has wholly crossed the sideline (or the area marked by cones behind the goal). To restart play after a ball has gone out, it is kick-in rather than a throw-in. The team who did not take the last touch on the ball shall take the pass or kick in. If there is a tackle where it cannot be determined who the ball last touched, the attacking team shall take the kick-in.

​FOULS AND MISCONDUCT: A player may not intentionally kick, trip, jump at, strike, hold, and push, charge from behind or violently charge an opponent. Players should not swear, gesture, or argue with the Event Host or any player. Fouls can be awarded against the player for this behaviour.

FREE KICKS – ALL FREE KICKS ARE INDIRECT For the purposes of our recreational league, all free kicks are indirect.  An ‘indirect’ free kick is one where a goal cannot be scored unless another player other than the kicker has touched it.  Players from the opposing team should be at least 4 meters from the ball when a free kick is taken.  The free kick is to be taken from the spot where the free kick was awarded.  Free kicks may be awarded for behaviour including, but not limited to the following:

“GOAL KICKS” (GOAL ROLLS) “Goal kicks” will be in the form of rollout from the goal-keeper.  This goal rollout may be taken from anywhere in the goal area.  Goal rolls are awarded when the whole of the ball has crossed the goal line (except for the scoring of a goal) and last touched by one of the attacking team.  Opponents must be clear of the goal area.  Goal rolls must be a roll (i.e. not an overhand throw) and must be on the ground.

CORNER KICKS There are no corner kicks in Street Soccer as all balls played behind the goals are able to be rebounded, and require team mates to play on.

WINNING TEAM The winner is the team with the greater number of goals at the end of the game. A draw will be awarded if both teams have an equal amount of goals. The winning team receives 3 points, 1 point each for drawn game and no points for a loss. Your Fun Points will affect your position on the standings. If two teams are matched on competition points, the team with the higher fun points rating will be favoured up the ladder.

FAIRPLAY SYSTEM Each league night you will have an Event Host onsite, but these guys are not official referees. Urban Rec is a recreational league which practices a fair-play and fun-first policy, meaning you should be making your own calls on the game. The Event Host will be there to make the calls not made by individuals, keep time, and help guide the games within the game play rules. The Urban Rec Event Host has the final say on any issue that cannot be self-resolved.

SPORTSMANSHIP All Urban Rec participants have read and agreed to the Urban Rec Code of Conduct. We also exercise a strict Disciplinary Policy. If you are seen to be rude in any way or not playing within the respect of the rules and Code of Conduct, you will be asked by the Urban Rec Staff to sub out of the game. If after returning to the game your attitude does not improve you will be asked to leave the venue, and an assessment will be made if you can play again. We do not tolerate idiots. Play fair.

Back to League Details
Please wait...